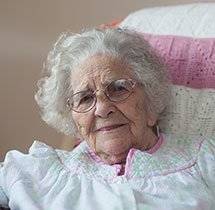 Leona is one of nine children. Her father worked in the logging industry, while her mother stayed at home to take care of the house and children.

At the age of 16, Leona married Richard Strasser. After they were married, Leona worked in the strawberry and raspberry fields and didn’t mind the physical labor because she loved the outdoors. Richard and Leona got by working on their farm, raising cows and chickens. Leona admits she didn’t milk the cows, but led them in and out. Farm life was familiar territory, as she also grew up with cows.

Leona’s hobbies include reading and completing crossword puzzle books. She came from a family of voracious readers and enjoys just about all genres of books.

Leona reads the Bible every day and believes that the secret to living to 100 years is Jesus. “Jesus is the leader, he provides. When he’s ready he will take me.”