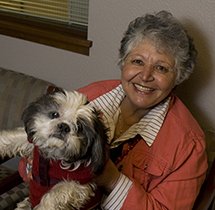 I was born in a tribe – we were nomads basically – in an area of the Middle East. My father and uncle were leaders of many big tribes in the area we were from. Dr. Colman, a British missionary doctor, delivered me – he is the one who picked my name. In Farsi, it means “well done.” When I was 10, two teachers were brought in to the tribe to teach us to speak English.

I attended Saint Michael’s College and took ESL courses. Then I went to Boston, Massachusetts to attend Boston University’s School of Nursing. I spent all of my time working and studying. I got a BS in Science and an MS in Nursing. After that, I headed off to California to study Developmental Psychology/Child Psychology at UCLA. After a year, I transferred to USIU in San Diego. I was homesick and hoped to meet more people I could relate to. I received my PhD in Human Behavior.

At that time, they were having curriculum changes in Persia (now Iran). I went to Persia to teach as Assistant Professor at Pahlavi University School of Medicine, a department of community medicine. I was there for two years. I asked if they needed someone to start a nursing school leading to a BS degree in south Iran and they did. It was called Jundishapoor University. I took the position as Dean of the school and completed the curriculum.

After a couple of years, I decided I was due for a vacation. Over the next couple of years, I traveled to England, France and back to the United States, and I published six journals. I returned to the United States in 1985 and went to San Francisco. I went to UCSF and met the Dean of the School of Nursing, Julian Lipson. She told me that the university was using my previous research and my journals for broad research. I started working in UCSF’s psychiatric department. They asked me to consult with the psychiatric patients in the Lang Reporter Psychiatric Institute and I also worked as a nurse there. I worked in nursing in California from 1985-1999.

I adopted a son March 21, 1967 named Ali. I raised him by myself. He was hyperactive so I had my hands full as a single parent. He decided to move to Portland when he was in his twenties and I thought I should go and look after him. In 1999, we moved to Portland where I worked as a phone consultant.

My son and I lived together for a while but it was not a good situation. I moved in to my own apartment and lived in a couple of places before coming to Providence Supportive Housing on December 5, 2008.

I am so blessed to have found such a secure, clean and well-staffed apartment building. I live with my Shih Tzu Daisy in my one bedroom apartment. I enjoy beading and making jewelry and I love serving people. I walk a lot and socialize with the other residents and neighbors. I attend church and have a strong relationship with God.