Nineteenth-Century Woman's Life Serves as a Timeless Call to Service 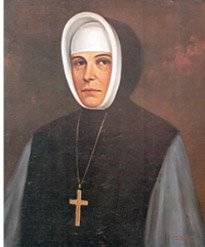 The lives of loving and heroic persons often seem to be unremarkable in the beginning. So it was with Émilie Gamelin, the foundress of the Sisters of Providence religious community whose life has served as a model for thousands of women religious and lay persons for more than 150 years.

Émilie Gamelin was born in Montreal in 1800. She grew to adulthood, married, nurtured children and suffered tragedy. From the wellsprings of personal desolation grew an intensified calling to serve others, especially the poor, and a responsiveness to the call of religious life.

In 1981, the process began within the Roman Catholic Church which resulted in the beatification of Émilie Gamelin. Beatification is the second of three main steps toward sainthood. The first step, being declared “venerable,” was decreed in 1993. Beatification for Mother Gamelin took place on October 7, 2001, during a solemn ceremony at St. Peter’s Basilica in Rome. Several hundred Sisters of Providence and supporters were in attendance. The process continues that may one day result in canonization for Blessed Émilie Gamelin, the third step leading to sainthood.

Evelyn Underhill, another 19th century woman and a well-known writer on mysticism said about saints, "It is a mistake to think of the saints as dead examples. They are, like ourselves, members of the mystical Body of Christ, living, real and ardent spirits, and it is often through them that God's life reaches us. Saints are simply the men and women who have responded fully to God's demands upon them."

Dedicated to the Poor

Émilie Gamelin was born on February 19, 1800, the last of 15 children born to Antoine Tavernier, a wheelwright, and Josephte Maurice. Of the children born to this couple, eight died in infancy. Her mother, described as frail and delicate in health but strong and energetic in character, lavished attention on Émilie and conveyed to her by example a deep interest in the poor.

Émilie was a helper of the poor from the time she could walk and talk. When she was three a poor man carrying a large sack stopped at the Tavernier home and asked for alms. Émilie emptied into his sack the portion her mother had set aside from the family table, but she wept with disappointment when she saw how insignificant the offerings looked at the bottom of the sack. Émilie could not be comforted until her mother permitted her to add her own small personal box of cherished possessions.

The first great sorrow came into Émilie's life at the age of four when her mother died. She was adopted by her aunt who gave her the best education available then in Montreal. The death of her father and a sister made grief a familiar visitor. When her brother was left a widower, he asked Émilie, who was then 18, to take charge of his household. She used one of the rooms in her brother's house as a dining room for the poor. It was a frequently used room.

As a young woman, she prayed to know her vocation and thought of entering religious life. However, her life took another turn.

When Émilie Gamelin was 23, she married John Baptiste Gamelin, a leading citizen of Montreal who was financially comfortable and who shared her beliefs about the importance of charity, devotion to the poor, and commitment to religion. Happiness was short-lived because her first two children died within months of their birth. In 1827, her husband died after a long illness and a year later her third and last child died.

Her grief was intense and only in the practice of charity could she find solace. She plunged into the work of the Ladies of Charity in Montreal, an association for the relief of the poor of the city. She soon discovered the plight of many elderly women, neglected by their families and relegated within their family home to an obscure corner without care or attention.

Émilie Gamelin sold part of her property and bought a house to serve as a refuge so that she could care for some of these aged women. The first guest was 102 years old. She was followed by fifteen other elderly women.

Soon, more room was necessary. Despite the open ridicule of her friends who thought it was foolish for an attractive young woman to devote herself to aged women, she purchased two houses in order to care for 30 residents. Émilie Gamelin had sole responsibility for all expenses and her own resources were rapidly depleted. One day she prayed at Montreal's Notre Dame church because she did not have the money to buy food. After prayers, she continued on her way to the market where she planned to beg at the stalls. An old man approached her and handed her 23 louis ($100) saying it was for the poor. Émilie Gamelin's life is filled with similar incidents in which she trusted completely in Divine Providence and was able to continue her work.

The second refuge was soon overcrowded. Through prayer and the generosity of a benefactor, the group moved into a building known as the "Yellow House." The guests in this spacious house were now able to work on projects to earn money for some of the expenses.

One of Émilie Gamelin's ongoing works was visiting the sick in their homes, particularly those stricken with cholera. In 1833, a ship from an Irish port landed at Grose Ile, Quebec. The passengers who disembarked numbered 133. Fifty-nine persons had died at sea. In six days there were 261 deaths. From one home, Madame Gamelin brought back to her house of aged women, six children whose parents had died of the disease. The "grandmothers" at the Yellow House took the children to their hearts, and the work with orphans began.

With the Aid of Friends

Émilie Gamelin had a gift for leading those with material wealth to understanding and compassion for the poor. She interested her well-to-do friends in works of charity giving them opportunities to support her ministry financially. One example was a rich friend whom she invited to come see her home for the needy. "What have you to show me except for a few half-crazy old women?" he scoffed. Finally, he relented and what he saw touched him and prompted him to make a large contribution for the work.

With Prisoners and Families

The insurrection of 1837, followed by the tragic exile and execution of political prisoners, launched Émilie Gamelin into new work. Because she was held in high regard by the community, she readily obtained permission to visit the prisoners. Daily she brought them food, tobacco, messages and gifts from their families. One of her agonizing tasks was to assist at the farewells between the condemned men and their families on the eve of execution or deportation.

With the Mentally Afflicted

Émilie Gamelin's strong interest in the care of people with mental illness can be traced to a request made by her husband around the time of his death. John Baptiste had begged her to continue caring for Dodais, a boy with mental retardation whom he had befriended. Dodais had rescued him after an attack in which John Baptiste had been left unconscious by the side of a road. The cries of Dodais summoned help. Émilie Gamelin fulfilled her husband's wish and cared for Dodais until he died at age 30. Dodais was described as "unable to do the smallest thing for himself, and capable of uttering only confusing and unintelligible sounds." Émilie Gamelin revealed to her spiritual director that Dodais at his death was granted the use of speech long enough to thank her for her tender care. Her interest in people with mental afflictions resulted in the establishment of many institutions of care throughout Quebec.

The religious community of the Sisters of Providence was founded on March 25, 1843. On December 26, 1843, Mother Gamelin welcomed Esther Pariseau, later known as Mother Joseph of the Sacred Heart, as the 13th member of the new community.

The two women worked closely together, expanding the various works of charity in Quebec. When Mother Gamelin died of cholera in 1851, Mother Joseph was her nurse and was at her side when she spoke her last words, "...humility...simplicity...charity."

In 1856, when she was 33, Mother Joseph brought the seeds of the works of charity from Montreal to the western United States. On May 1, 1980, a statue of Mother Joseph was permanently installed in National Statuary Hall, Washington, D.C. in recognition of her service as "an historic leader of national renown." A reconstituted U.S. province was named in her honor.

A Community is Founded

Bishop Ignace Bourget of Montreal made plans to ask some women religious from Paris to become involved in and carry on the work founded by Émilie Gamelin. Eventually, the sisters under consideration sent word that they could not come to Canada. The Bishop made a prayerful decision to found a diocesan order of women religious to carry on Émilie Gamelin's work. Although she was not among the original group of seven sisters, Émilie Gamelin soon became a novice and on March 30, 1844, she became Mother Gamelin, the first Superior General of the young community.

Mother of the Poor

During the Irish famine of 1847, many people immigrated to the United States and Canada only to die of cholera by the thousands during passage. Mother Gamelin received 650 children orphaned by the epidemic. Other works continued with the establishment of day schools, boarding schools, shelters and places dedicated to the care of persons with mental illness and a school for those with hearing impairments.

The community grew rapidly under Mother Gamelin's direction. Before she died, the community had 49 sisters and nine houses. The Sisters of Providence early works include ministry to persons in poverty, in prison, with mental illness, with hearing impairments and speech disorders, orphans, people with handicaps and others oppressed by suffering. Mother Gamelin became known as "Mother of the Poor" and the people called her shelters "House of Providence."

An Example to Our Century

Near the end of August 1851, cholera returned to Montreal. Three Sisters of Providence died caring for cholera victims. On September 23, in the middle of the night, Mother Gamelin awakened a sister saying, "I have the cholera. I am going to die."

At 8 o'clock in the morning she urged the sisters gathered at her side to practice the virtues of humility, simplicity and charity. Before she could complete the word charity, she slipped into unconsciousness and soon died. She was 51.

Divine Providence was truly made manifest in Émilie Gamelin's life through her care of the poor, her presence in the lives of those who suffered, and in her obedience to God's call. Today, the community of the Sisters of Providence has 1,026 sisters serving in Canada, the United States, Chile, Argentina, Egypt, Cameroon, El Salvador, Haiti, and the Philippines. The Providence mission is carried on today with the same spirit of compassion that called Mother Gamelin.