In this issue:
Mother Joseph Centennial
A Year of Anniversaries
Reflections on Rome
Meeting the "Tommys"
New Online The 100th anniversary of the death of Mother Joseph of the Sacred Heart, January 19, 2002, is drawing near! The planning committee is preparing a number of new resources for study of her life, as well as opportunities to commemorate her death and celebrate her legacy throughout the year.

The celebration will begin on January 19, with publication of an updated biographical sketch and an online essay on Mother Joseph's last days, drawn from the chronicles and other eye-witness accounts.  No matter how much you know about Mother Joseph's life, you will learn something new! A selection of suggested prayer services will also be distributed.

On Sunday, January 20, all are invited to attend a Celebration of Mother Joseph's Life, at 2:00 p.m., at St. James Church, Vancouver, Washington. This event is hosted by the St. James and Clark County Historical Societies in honor of Mother Joseph's contributions to the people of Vancouver. After the ecumenical prayer service there will be opportunity to visit St. James Acres Cemetery, where flowers will be placed on Mother Joseph's grave, and join a guided tour of Providence Academy, her masterwork. Refreshments will be served at the Clark County Historical Society. For more information, please call Donna Quenell, at 360.694.0766.

April 16, her birthday and Mother Joseph Day in Washington State, will provide another opportunity to celebrate the life of this remarkable woman. An activity packet will be made available with creative ideas, including historic recipes, a trivia quiz, and more.

The year will come to a close in December with distribution of a map and guide tracing Mother Joseph's historic travels. This project is still in the early stages of development but promises to be a fun and interesting new way of connecting with Mother Joseph as you travel through the territory she covered during 45 years of service to the west.

Resource packets will be distributed in a variety of ways to sisters, associates, employees of Providence Services and Providence Health System, and the general public. Please contact the archives if you have any questions or suggestions for spreading the word about this Mother Joseph Centennial year.

A YEAR OF ANNIVERSARIES

Next December will mark the 150th anniversary of the Sisters of Providence first mission to the Pacific Northwest. The mission was short-lived, but led to the foundation of the sisters' ministries in Chile and opened the way for Mother Joseph and her companions to come west four years later.

The pilgrimage to Rome for the beatification of Blessed Emilie Gamelin was a spiritual experience that is difficult to capture in words. As time passes, the event slips into the past but pictures and stories do wonders to carry the moment into the present. A visit to Rome is cultural overload for the mind and senses since one can not help but be immersed in the art, history and culture of the Roman Catholic Church. Contrasts between the old and the new, the simple and the grand are everywhere and a daily part of people’s lives. 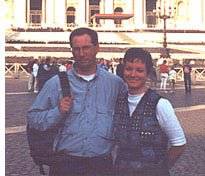 Loretta and her husband, Lindon, enjoy the sunlit plaza in front of St. Peter's Basilica.

A full realization of the impending beatification began on Friday, October 5, our first full day in Rome. After making the first of many trips through the parking lot tunnels, the magnificent columns of St. Peter Square greeted us. It was obvious that preparations for the ceremony were well underway: steel barricades and wood fences creating sectioned seating areas; workers busily setting up chairs; the covered portraits hung from the basilica windows; and a raised platform extending the width of St. Peter’s Basilica on which were the altar and canopy for the Pope and chairs for the clergy and honored guests. It is a massive undertaking and while the workers were simply doing their job for yet another group of pilgrims, I felt a rush of excitement knowing that they were getting ready for us.

I woke at 5:00 a.m. on Sunday, October 7, the long awaited day. The night sky was dark and clear with twinkling stars. I recognized these stars as the same ones that greet us in our mornings half a world away. None of us needed a weather forecast to tell us that this cloudless morning would mean a sunny and hot day for the celebration. 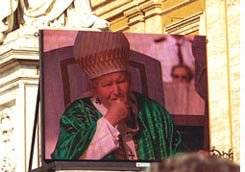 Pope John Paul II, shown on one of several large video screens, listens to the reading of the life of Blessed Emilie Gamelin.

Before the ceremony began, the choir sang, followed by the bells of St. Peter’s pealing their glorious tones for fifteen minutes. Hundreds of clergy, with the Pope last in line, processed out of St. Peter’s center doors. Since all wore green vestments it was difficult to distinguish the Pope, yet there he was. While the Pope is frail, he was very attentive to the presentations in all languages.

The ceremony was primarily in Latin but included the native language of each of the persons being beatified. Even though I could not understand everything I could guess at what was said by the cardinals and other dignitaries. In the sequence of events, Mother Gamelin was the fifth of the seven beati so it was easy to know when the ceremony referred to her.

The feelings that summed up the ceremony for me were unity and peace. Here we were thousands of people from all corners of the earth and we were united in the ceremony in which we were participating. The same efforts and prayers each group expended in the past decades to bring their individual to this blessed day united us. And despite the different languages we spoke, we were united because we really spoke the same language.

During the Sign of Peace ritual within the Mass, hands were extended to neighbors within reach, but more importantly, hands were stretched across aisles and several rows as strangers, speaking their own tongue, greeted each other and understood what was said. The oneness of our world was there as we honored these individuals who through their actions are models for us in our world today. Yet with this feeling in the back of my mind I couldn’t help but think of the strife in our world and the bombings that had begun in Afghanistan not all that far away from us in Rome. Unity is what was spoken to me that day and is the souvenir that I took home in my heart.

(View a few more of Loretta's favorite photos from Rome.)

Most archival repositories are large enough that no archivist ever comes into direct contact with every collection. Some holdings, like those at the National Archives, are so vast that a staff member may only be involved with a tiny fraction of the whole. Even in the comparatively small holdings of the Sisters of Providence Archives one may never see all that is there. That is why it is often the reference requests that we fill, more than our daily work of processing or preserving, that bring us into the most intimate and exciting contact with specific collections. A phone call or (increasingly) e-mail arrives and suddenly you find yourself immersed in a part of the collection you had never encountered.

It was just such a request that put me into contact with the records of St. Thomas School and Home, Great Falls, Montana. Established by the sisters at Columbus Hospital in 1908, the orphanage moved to a permanent facility in 1910. Although the Home closed in 1981, the ministry continues today as St. Thomas Child and Family Center. A staff member there requested historical material in preparation for the reunion of former residents--known affectionately as the "Tommys"--which is held biannually, alternating between Great Falls and Spokane.

A trip to our Spokane facility, where the former St. Ignatius Province records are housed, revealed an abundance of photographs and scrapbooks, and a wonderful book of reminiscences compiled by Tim Kennedy, whose father was a "Tommy" (Archives and Accounts of the St. Thomas Orphans Home, 1999). I would use these resources, coupled with rare 16mm movie footage and the wonders of software, to provide the reunion attendees with a digital scrapbook that all could enjoy without handling the precious originals.

What's more, I learned something about one of the sisters' oldest but perhaps least recognized ministries, the care of orphans and children in need. The word "orphanage" nearly always conjures up Dickensian imagery of children wearing rags, living in filth and watched over by unfeeling administrators and vindictive school masters. A reporter writing for a Great Falls newspaper in January 1910, prior to the grand opening of the new St. Thomas Home, referred to the orphans as "stray mites of humanity," while describing the building itself in glowing terms.

The photographs and reminiscences available in our collections tell a far different story than one might suspect.

Bishop Thomas Lenihan of Cheyenne had left a bequest of $5,000 to care for orphans, and so his surviving brother, Bishop Mathias Lenihan requested help of the Sisters of Providence and gave the money for a home to be established in his own diocese of Great Falls. Mathias added to this $5,000 more, and with generous help from the civic community, the building opened on the Feast of St. Thomas, December 10, 1910, with about 40 orphans cared for by nine sisters. Operating expenses came from a variety of sources including the local "community chest" and the sisters' fund-raising throughout eastern Montana; some per-child county dollars; from relations of resident children; and from bequests.

The reasons for children needing the sisters’ help were as various as they would be today: Illness, addiction, abuse, poverty, crime and death all took their toll and left children defenseless. At St. Thomas Home, the children were provided with clean facilities in which to heal and grow, and a goodly amount of religious instruction and order in the form of daily routine. (The sister chroniclers note that non-Catholic children, while required to be present at services, were never made to admit the faith unless their parents or guardians specifically requested catechism.)

Apart from their scholastic lessons, the girls learned home economy such as cooking, cleaning, and sewing, while youngsters in the Boys’ Division practiced drill in the Fife & Drum Corps. All participated in choral work and dramatics, and the children frequently performed in community settings outside the Home itself. They were also treated to shows and movies that came through town, thanks to the sponsorship of local businesses. The older children would chaperon the young in cases where the sisters were not permitted to attend, such as movies and carnivals. Camping trips to Monarch Canyon provided wonderful outdoor recreation for children and sisters alike.

The sisters provided not only instruction and structure, but unqualified love and caring. While no childhood is perfect, the materials in our archives, and reminiscences in Tim Kennedy’s volume show us children that had opportunity allowed back into their lives where circumstances may have taken it away. Most found the stability and care they needed to build satisfying lives for themselves, and they remain grateful to the sisters who raised them. Although I was not able to meet any of the "Tommys" in person, by the time I finished the project and shipped a CD off to Great Falls for the reunion, I felt touched and lucky to come into contact with their lives, if only in a small way.