The Santa Monica hospital, which participated in the first two phases of the drug’s clinical development, was the first of 120 sites across 15 countries to begin enrolling patients in the trial’s final phase.

The goal of the placebo-controlled, randomized trial is to determine if a drug known as ONC201 is effective, following initial radiation therapy, in extending a patient’s survival and halting the cancer’s progress.

Manufactured and developed by North Carolina-based Chimerix, Inc., the experimental drug aims to induce cell death – without harming healthy cells – by shutting down signaling pathways that help tumors grow.  ONC201 has shown promising early results for patients with brain tumors that have the H3 K27M-mutation, including significant tumor shrinkage in some patients, according to Chimerix. In addition, few serious side effects related to ONC201 were reported in previous phases of the trial.

One patient, 36-year-old Benjamin, has been able to take the drug for three years through an expanded access trial and is now beating the odds, even showing some disease regression.

For Benjamin, the first sign something wasn’t right came just before his 32nd birthday, when his tongue went numb. Other symptoms later followed – his migraines started increasing and then there was the day at work when he misjudged a corner and walked into a wall. Benjamin’s stepfather, a family practice doctor, suggested he see a neurologist. The specialist couldn’t find a problem, but Benjamin pressed and an MRI was ordered. The diagnostic test revealed what was later determined to be a DMG tumor on his brainstem.

He chose to enroll in the clinical trial in the hopes of finding an innovative option that could safely treat his tumor. In the four years since, Benjamin has continued to take ONC201 and he and his wife have had two daughters, now 3 years old and 9 months old. He counts Cow, his goldendoodle, among his best friends.

“I have my health issues, but I’m alive,” said Benjamin, who had to leave his job as a computer programmer for a tech company due to his illness. “I’m living day-by-day, minute-by-minute, and I’m so thankful.

Dr. Sharma is encouraged by stories like Benjamin’s and continues to follow the journey of this experimental cancer drug as it undergoes clinical trials. She hopes that additional data from this Phase III study will be positive and eventually lead to approval of the drug from the U.S. Food and Drug Administration (FDA). 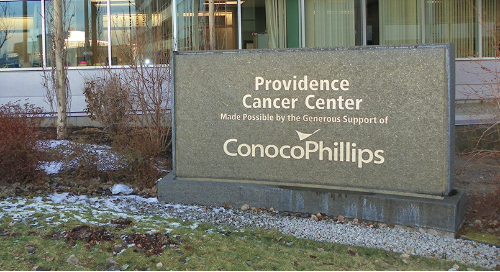 Providence Cancer Center earns national accreditation
The Commission on Cancer, a quality program of the American College of Surgeons, has awarded a three-year accreditation to the cancer program at Providence Alaska Medical Center.