Mother Joseph in the Hall of Fame Since 1987, the Junior Achievement Puget Sound Business Hall of Fame has celebrated the accomplishments of business leaders who have made a lasting impact on the region. Laureates are selected on the basis of their contributions to business and the economy, rather than their involvement in community or philanthropic causes. In addition, they must no longer be involved in the day-to-day management of their businesses.

Mother Joseph was recognized as founder of numerous hospitals and schools in western Washington and of the parent corporation of Providence Health System. As noted in the invitation to the induction ceremony, "she spent her life seeing to it that the poor were cared for, the homeless sheltered, the sick tended, the hungry fed. To accomplish her mission, she established, designed and built institutions that have evolved into the Providence Health System. Many things to many people, she was above all, truly a woman of faith in Providence." 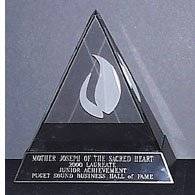 Sister Barbara Schamber, Provincial Superior, Mother Joseph Province, and Presiding Member, Providence Health System, accepted the award on behalf of Mother Joseph and all of the Sisters of Providence and Health System employees. Students who participate in Junior Achievement introduced the laureates, served as table hosts, and entertained for an appreciative audience of more than 500 at the gala awards ceremony. The evening also featured the premiere of a four-minute videotape on Mother Joseph's life and contributions, using photographs and artifacts from the archives. This video and biographical materials will be used throughout the year in Junior Achievement's school programs in the Puget Sound and Tri-Cities areas.

Honored with Mother Joseph were three businessmen: George Russell, of the Frank Russell Company; Holt Webster, of Airborne Express; and Frank McLaughlin, of Puget Power. Their portraits and biographies will hang in the permanent Hall of Fame, located at the World Trade Center in Seattle.