Each year almost every family in our community is touched by one or more of the services offered by St. Mary Medical Center, ranging from wellness and prevention programs to state-of-the-art diagnostic, medical and surgical procedures.

St. Mary Medical Center has grown to become a leader in medical excellence by continuing to plan and innovate for the future. Progressing from a small facility in 1956 to the comprehensive, 212-bed hospital it is today, St. Mary Medical Center’s dedication to serving the public has remained intrinsic to its core values of Compassion, Dignity, Justice, Excellence and Integrity. At St. Mary, community focus is approached on a person-by-person basis and is ever present in the staff’s total-care philosophy. In the spirit of healing, St. Mary provides health care for each patient, addressing and answering patient’s needs individually as valued members of the community.

Our Medical Staff is made up of more than 300 High Desert doctors. These physicians provide services in a multitude of disciplines including pediatrics, oncology, cardiology, family medicine, internal medicine, obstetrics and more. Physicians on staff at St. Mary have offices throughout the Victor Valley and San Bernardino and Riverside counties.

Patient safety is of paramount concern at St. Mary Medical Center and we have implemented a number of strategies to achieve continuous improvement in this area. Our patient safety goals officer combats safety challenges by developing safer procedures and educating our staff about these improved methods hospital-wide. Although healthcare processes have become enormously complex as medicine advances, St. Mary Medical Center is committed to putting patient safety above all else.

As stewards of patient health and wellbeing, we actively pursue awards and certifications that showcase our high standard of care. Our most recent achievements and accreditations include:

Messages may be left at this number at any time. Return calls or visits from the Service Representatives will be made by the next working day (Mon. - Fri.). If you have an immediate need, please don’t hesitate to call the hospital operator “0” and ask to speak with a supervisor.

St. Mary Medical Center offers a community newsletter to assist you and your family in living better, longer and healthier. 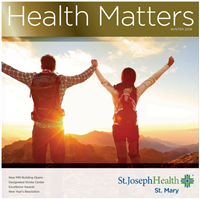