For more than 60 years, St. Jude Medical Center has met the needs of the community by offering the highest quality care with compassion and respect.

We are one of Southern California's most respected and technologically advanced hospitals, and our five core values: Compassion, Dignity, Excellence, Justice and Integrity are the guiding principles for everything we do. St. Jude is synonymous with exceptional care that extends beyond good medicine to a commitment to caring for you – mind, body and spirit.

St. Jude Medical Center is a faith-based, non-profit, 320-bed, acute care hospital. With nearly 700 of Southern California’s finest physicians on staff, St. Jude offers every medical specialty and sub-specialty. Whether for the birth of a baby, life-saving surgery or a routine mammogram, St. Jude continues to set the standard for medical care and offers the community the most comprehensive array of services and programs.

In 1650, the Sisters of St. Joseph are founded by Father Jean-Pierre Medaille, a Jesuit priest in LePuy, France. He has the vision to organize an order of religious women who, rather than remaining safely cloistered in a convent, would venture out into the community, seek out "the dear neighbor" and minister to their needs. In 1836, the first six missionaries travel to St. Louis, Missouri.

More than 60 years ago, over two thousand people stood in the rain to see the opening of the new St. Jude Hospital. In the words of one newspaper, “This is the day we have been waiting for. All of Orange County rejoices over the completion of the ultramodern St. Jude Hospital.”

There was tremendous excitement over the high-tech features of the new hospital. Going far beyond the community standard at the time, it offered the latest advances in care including state-of-the-art operating areas and a new concept in medicine called “the recovery room.” Even the kitchen offered the newest equipment—and when the former chef of Knott’s Berry Farm was hired—one newspaper called St. Jude’s patients the “best fed in the country.”

The new hospital was the result of a remarkable partnership between the Sisters of St. Joseph of Orange—who dreamed of setting a new standard of care in Orange County—and a community who was eager to help make it possible. Neighboring cities, businesses and residents all found ways to raise money to make St. Jude Hospital a reality. The Assistance League held book review parties; the Cub Scouts organized a circus; the Women’s Club hosted bridge parties; and the Kiwanis created a comedy show. From Northrop Aircraft, who auctioned off lunches with Cary Grant and Humphrey Bogart, to the Rotary Club’s sold-out dinner dance, there was an almost endless variety of fundraising events.

In the end, over $750,000 was raised in just six months. Enough money, that when matched by the Sisters of St. Joseph of Orange, meant construction of the desperately needed hospital could begin.

Learn about our historical milestones.

The best and brightest

Within days of opening, every bed in the new hospital was filled and St. Jude’s reputation quickly grew. The best and brightest doctors began coming from all over, attracted to St. Jude’s mission of excellence and the opportunity to practice the highest quality medicine.

“St. Jude was like a magnet. This was where physicians from the nation’s top medical schools and training programs wanted to be,” explains Joseph Lawton, M.D., retired family medicine physician, who joined the staff in 1960. “What St. Jude offered was truly unique: a first-class hospital where the values of excellence and compassion were felt by everyone who walked through the doors.”

Learn about our medical milestones.

Despite the impressive technology, it was this difference of the heart that truly distinguished the new hospital. “The sisters’ values and their profound sense of fulfilling a higher calling created an atmosphere where extraordinary care became not just possible but expected,” explains William Lenahan, M.D., a retired St. Jude physician for 45 years, beginning the day the hospital opened.

The sisters could be found on every floor, from Sister Augustine supervising the surgery rooms to Sister Mary managing the brand new X-ray department. Long before the phrase “female executive” or “continuous improvement” even existed, the sisters ensured excellence was St. Jude’s defining quality. Their faithful service to others and to God inspired St. Jude’s doctors, nurses and staff to go beyond curing illness—and touch lives.

Much remains the same

While much has changed in the last 60 years, some things have remained the same. St. Jude is still one of Southern California’s most technologically advanced hospitals. And the sisters’ life-affirming mission and profound sense of fulfilling a higher calling still create an atmosphere that makes extraordinary care possible.

St. Jude Medical Center is a faith-based, not-for-profit hospital located in Fullerton, California. Established by the Sisters of St. Joseph of Orange in 1957, St. Jude provides exceptional care and is one of Southern California's most respected and technologically advanced hospitals. With nearly 700 of the area's finest physicians on staff, St. Jude offers nearly every medical specialty and sub-specialty. Whether for the birth of a baby, lifesaving surgery or a routine mammogram, St. Jude continues to set the standard for medical care and offers the community the most comprehensive array of services and programs.

St. Jude Medical Center offers a community newsletter to assist you and your family in living better, longer and healthier. If you have any questions or would like to be included on our mailing list, please call Community Relations at 714-446-5912. St. Jude Medical Center has set standards to continuously improve performance, provide the highest quality of patient care and to ensure our patients are treated in a safe environment. In response, the Administration and Board of Trustees have invited The Joint Commission to conduct a full survey of St. Jude Medical Center.

St. Jude Medical Center, in conjunction with the Joint Commission, views the survey process as part of our efforts to provide the highest standard of care, and not a one-time "inspection" of compliance. We use this opportunity to have key processes validated and welcome recommendations for improvement. We also initiate proactive steps for performance improvement. For further information concerning the Joint Commission visit their website at www.jointcommission.org.

If you have a concern or complaint about patient care or safety, we encourage you to contact our Patient Relations Specialist at 714-992-3000, ext. 3749 or by writing to:

Awards aren’t the reason we pursue excellence, but they do help make clear our commitment to offer the highest standards of care. We are proud to have been awarded the following:

The Leapfrog Group, a national nonprofit health care ratings organization, awarded St. Jude Medical Center an “A” rating for the hospital’s commitment to keeping patients safe while meeting the highest safety standards in the nation. The Leapfrog Hospital Safety Grade uses 27 measures of hospital safety data to assign a grade to U.S. hospitals based on their performance in preventing medical errors, infections and other patient harms. (Fall 2018)

St. Jude Medical Center’s Pulmonary Rehabilitation Program is among the select programs to be recognized and certified by the American Association of Cardiovascular and Pulmonary Rehabilitation (AACVPR). This honor highlights the hospital’s commitment to using today’s most advanced practices to help restore the health and quality of life of those with chronic lung conditions. (2017-2020) Demonstrating exemplary care and outcomes in joint replacement, St. Jude is one of only 62 hospitals in the nation to receive The Joint Commission’s Advanced Certification for Total Hip and Knee Replacement— the highest distinction available from the country’s premier healthcare accrediting body. To earn the prestigious designation, St. Jude and St. Jude Heritage Medical Group, Orthopedics, underwent a rigorous, two-day, on-site review of the quality and safety of the hospital’s joint replacement services, including pre-operative, intraoperative and post-surgical care and outcomes. St. Jude is one of only eight hospitals in California to meet the designation’s quality requirements. (Accreditation is for 2018-2019) 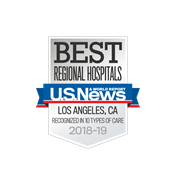 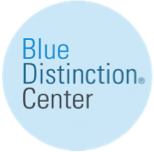 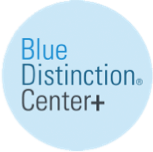 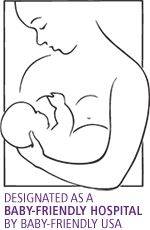 St. Jude Medical Center has once again earned accreditation as a Baby-Friendly Hospital, an honor recognizing hospitals that provide optimum, evidence-based care to mothers and babies. To qualify as “Baby-Friendly,” a hospital must demonstrate national best practices that offer infants the best start in life by creating an environment where breastfeeding is made easy and mother-baby bonding is improved. Baby-Friendly Hospital Initiative is sponsored by the World Health Organization and the United Nations’ Children’s Fund. (2016 - 2021)

St. Jude Medical Center is one of only a few hospitals in the state to be recognized as an Advanced Comprehensive Stroke Center. This recognition, given by The Joint Commission and the American Heart/Stroke Associations, identifies an elite group of hospitals capable of offering the highest level of stroke. The prestigious designation recognizes the significant differences in expertise, resources and training necessary for the treatment of complex stroke. 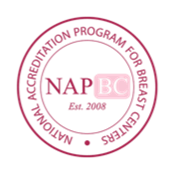 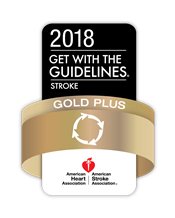 For the fourth year in a row, St. Jude Medical Center’s Stroke Center has been awarded the American Heart/American Stroke Association's Gold Plus Award, an advanced level of recognition that acknowledges St. Jude’s compliance with the Quality Measures within the Get With The Guidelines® Stroke Program. Get With The Guidelines® is a program that helps ensure consistent application of the most recent American Heart Association/American Stroke Association scientific guidelines for patient treatment.

Nearly 50 members of SJMC's medical staff were distinguished by the Orange County Medical Association as "2017 Physicians of Excellence." The annual program honors the region's outstanding physicians for their dedication to the profession and for their service to the community.

St. Jude has received the American Heart Association/American Stroke Association’s Get With The Guidelines®–Target: Stroke Honor Roll-Elite Quality Achievement Award. The award recognizes the hospital’s commitment and success ensuring that stroke patients receive the most appropriate treatment according to nationally recognized and research-based guidelines. Hospitals must meet quality measures developed to reduce the time between the patient’s arrival and treatment with the clot-buster tissue plasminogen activator, or tPA, the only drug approved by the U.S. Food and Drug Administration to treat ischemic stroke. St. Jude has also met the stringent guidelines to be distinguished an Advanced Comprehensive Stroke Center.

St. Jude was honored with the Beacon Award for Excellence from the American Association of Critical-Care Nurses (AACN), a distinction earned by only 5 percent of California’s hospitals. The award distinguishes critical care units who exemplify excellence in clinical practice and utilize today’s best evidence-based practices to create superior outcomes for critically ill patients. (Accreditation is for 2017-2018)

St. Jude’s Crosson Cancer Institute was among an elite group of hospitals to receive accreditation from the Commission on Cancer (CoC), a program of the American College of Surgeons (ACoS). The accreditation recognizes those cancer programs capable of providing comprehensive, high-quality, and multidisciplinary patient-centered care. (Accreditation is for 2017-2019)

St. Jude Medical Center has been named a national Center of Excellence by the American Society for Gastrointestinal Endoscopy (ASGE), the nation’s leading medical society of quality and safety in endoscopic diagnosis and treatment. St. Jude is one of fewer than 20 hospitals in California to be recognized by the ASGE, and both the hospital’s inpatient endoscopy unit and the outpatient Knott Family Endoscopy Center were distinguished for their use of best practices, elevation of patient safety, and overall excellence in the use of endoscopic procedures to diagnose and treat issues involving the GI tract.