We invite you to take a look at the people and events that have shaped our hospital's past. 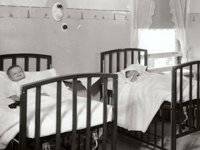 A Long Legacy of Caring

After leaving the Motherhouse of the Sisters of Providence in Montreal, Mother Joseph of the Sacred Heart and four sister companions arrived at Ft. Vancouver, Washington Territory on December 8, 1856 to serve where there were unmet needs, particularly among the poor. Thus began the history, heritage and legacy of the Sisters of Providence in establishing health care, educational and social service ministries for people in the Northwestern and coastal regions of the United States and Canada.

At the request of Fr. Joseph Cataldo, S.J., Mother Joseph designed and supervised the 1886 construction of a 'refuge for the homeless, poor and dying', the region's first hospital, built in the bustling frontier town of Spokane Falls. Sacred Heart Hospital, a 31 bed, wood-framed structure, soon was a landmark along the Spokane River where the Spokane Convention Center now stands. Sacred Heart was one of 29 hospitals, schools, orphanages and care centers established by Mother Joseph to care for the sick, poor, aged, homeless and children.

As Spokane became a center for commerce and trade, Sacred Heart Hospital quickly outgrew its first location. In 1910, horse-drawn wagons conveyed the hospital's contents and patients to a new location on the South Hill (the current site of the Medical Center), which was considered to be 'out of town'. The 1910 hospital had 240 rooms and could accommodate 1000 patients.

Over the years, Sacred Heart Medical Center has continued to keep pace with the changing health needs of the community and the rapid development of medical technology and health care. The present Sacred Heart Medical Center's nine-story patient tower was built in 1971. By 1984 the new East addition housed psychiatric, outpatient, radiology and pediatric surgery services. Recent campus developments include The Heart Institute (1991), the expansion of the Sacred Heart Doctor's Building (1993), and Emilie Court, an assisted living facility (2000).

Again responding to requests from the medical community, and supported by the community leaders and families, Sacred Heart Children's Hospital, the region's first full-service Children's Hospital opened in 2003. The fall of 2004 saw the opening of the Women's Health Center and Surgery Center, West Tower addition.

Following in the footsteps of our early pioneer sisters and their lay colleagues, Sacred Heart employees serve the Providence Mission and Values in providing for the contemporary health care needs of people throughout the Inland Northwest.