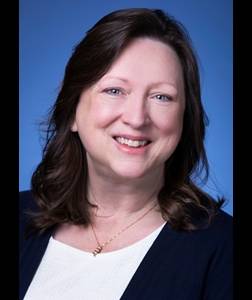 "Nurses at Providence Alaska Medical Center strive to continually improve our culture of excellence and to live the mission of the Sisters of Providence. The nurses are engaged in shared governance to review and apply the evidence to improve our processes and enhance our patient outcomes.

The success of this collaboration is demonstrated in our clinical quality nurse sensitive outcomes measures. Our patient satisfaction continues to demonstrate this as well. Achieving excellent patient outcomes and high patient experience has led us to be a Magnet organization, primarily designated in 2018.

I am humbled to see the dedication and compassion of our nurses and the entire team here at Providence Alaska Medical Center. I hear stories from nurses about how they care for our community by delivering compassionate and high-quality care. I also hear very positive comments from those in the community about the outstanding care that they received at Providence Alaska Medical Center.

I very honored to lead this outstanding team of nursing professionals. Please look through this website to see about life and nursing at Providence Alaska Medical Center. We would love for you to join us!"

"Compassion means leaving my bias at the door as I walk into a patient’s room with the goal of putting the patient at the center of my care. It means walking in my patients’ shoes, viewing my patient’s world through the lens of their eyes and feeling their pain as though they were mine. Holding their hands and guiding them through one of the most difficult periods of their lives.  My daily goal and hope are that I/we show compassion the way the Sisters of Providence intended. Ultimately, may I/we strive daily to show compassion the way Jesus did.” - E.B., PCU/IMCU RN

"One of the ways we can normally ease a patient's way as they are dying is to support family and friends at bedside, so that their final moments can be spent surrounded by the people they love. Unfortunately, in the tumult of the pandemic, we were not always able to offer that support in the way we were used to. But we are nurses. We do our best. We improvise. We brainstorm and troubleshoot and keep trying.” - C. L., PCU/IMCU RN – Excerpt taken from the 2020 Nursing Annual Report

"I have to say the only reason I ended up in the ER was due to calling the Nurse Help Line.  If the nurse hadn’t recognized the potential issue of my condition I wouldn’t have ever made the effort of coming in.  More than likely she probably helped save my life by convincing me to come in.  I know both the nurses and doctors see tons of patients on any given shift, but I never felt like just a number that day.” - Excerpt from a patient letter

"I was blessed with the best nursing staff ever.  One was very helpful and courteous.  Melissa went out of her way to be helpful and friendly.  It’s difficult to pinpoint a specific action during my extended stay with Providence.  She never failed at being sympathetic, encouraging, and supportive!  She took a genuine interest in my recovery.” - Daisy nomination excerpt for M.H., RCU RN

"At every shift change, the nurse who had been primarily caring for me made sure to bring the replacing nurse to my room, discuss my needs and progress, and politely said good-bye.  That kind continuity went a long way to helping me feel secure and cared about” - Excerpt from a patient letter

We promise to know you, hear you, and deliver exceptional, compassionate care to help ease your way, keeping you informed through every step of your health journey. We will not only teach you, but learn from you, engage with you and heal you.

We promise to listen to you, engage you in patient care while taking the time to know you. We will both learn from you and teach you and provide support to empower you in your career. Providence has a long history of serving Alaska, beginning with the Sisters of Providence serving the poor, sick and vulnerable in French-speaking territories in eastern Canada in 1843. The Sisters of Providence – Sister Mary Conrad, Sister Rodrigue, Sister Lambert and Sister Mary Napoleon – first brought health care to Nome in 1902 during the Gold Rush. This pioneering spirit set the standard for modern health care in Alaska and formed the foundation for Providence's growth as the state's leading health care provider.

The original Providence Alaska Medical Center was a three-story building on a square block at Eighth and L Streets two blocks from Cook Inlet and consisted of four or five doctors, which was considered much too large for the needs of the city at the time. Since then, the hospital has grown to a staff of over 3,000  and a space of 681,281 sq ft. 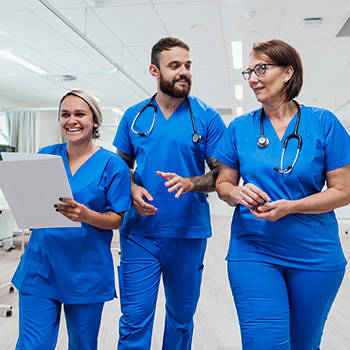 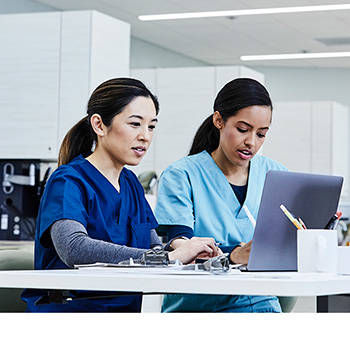 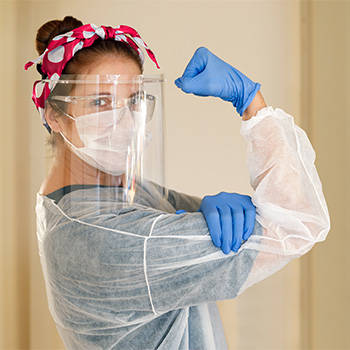 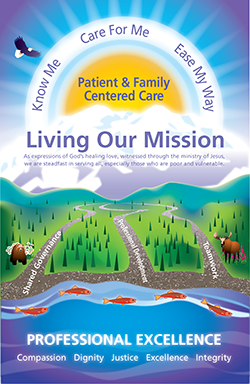 The model takes the form of a riverbed in which shared governance, professional development and teamwork flows from a river of professional excellence which embodies the core values of compassion, dignity, justice, excellence and integrity.

These values spread and sustain life to the poor and vulnerable throughout the community by providing the best possible care to our patients.